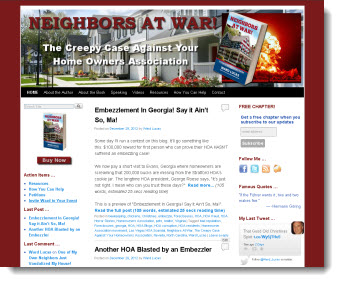 Ward has spent 40 years in investigative journalism and has won more than 70 journalism and civic awards for his reporting and writing. He was the first reporter on the DB Cooper hijacking and the Ted Bundy murders. He has interviewed Presidents and nursing home residents, Secretaries of State to street people.

From organized crime to wiretapping, to professional arson, Lucas has seen it all. In his new book, Neighbors At War, he presents startling information about how the modern Homeowners Association Movement is impacting Americans.

As the stories continue to pour in, in addition to his own horror story, “Neighbors at War” is destined to change the way Americans look at Covenant Controlled Communities. Visit his site and subscribe to his list – you’re going to want to read each one of these unbelievable stories.

Neighbors at War; The Creepy Case Against Your Homeowners Association